Samurai RevolutionThis site is dedicated to Age of Empires III

1.4 – The winner of each group will move onto the Grand Finals.

*Subject to change based on registration numbers and extenuating circumstances as mentioned above.

2.1 – Every player must respect their opponents, casters, and staff. Racism and any other type of discrimination and/or insults are not tolerated and will instigate a misbehavior disqualification if necessary.

2.3 – One restart for an unacceptable spawn is allowed per team if necessary. Please object at the beginning of the match (within 1 minute), and rehost the match.   For example, you have no hunts, are not close to accessible wood and coin, are obstructed by a trade route, or are too close to another opponent (for example you cannot build because you are too close).

2.5 – Matches will be played on ESOC patch using the SUPREMACY game type with the STANDARD rules and the game set to record.

2.6 – All matches must be recorded. The winner must send the recordings to SamuraiRevolution by way of DM on Discord. Please name the recordings based on your group number. 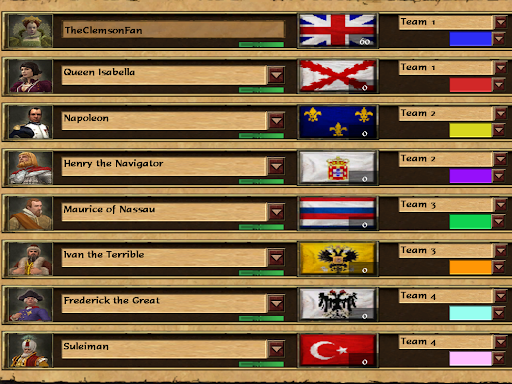 3.1 – Game modifications and exploits are NOT allowed, unless you have very similar mods from other source that does not grant an unfair advantage. If you are not sure about the mods, please contact tournament admin. Admin reserves the right to disqualify a team for use of any (or suspected use of) exploits to gain an unfair advantage.

3.3 – Any Streaming of your tournament games is forbidden.  As this is a team tournament, voice chat with your teammate is allowed.  However you must use the 2v2 voice channels in the SamuraiRevolutionOfficial Discord.

3.4 – If you suspect your opponent has violated any of the player integrity rules, finish the game and submit it for review with an explanation of why you think the game was unfair. If the admin finds someone to be guilty of cheating, the cheater(s) will be disqualified from the tournament.

3.5 – Please listen to your tournament administrator, if game modifications, resets, disqualifications, or other actions need to be made, their word is the final word. Just as a referee’s decision is the final decision.

3.7 – The registered account name must be the main account of its owner. Staff have the final say in determining the eligibility of a player for their PR qualification ranking. A minimum of 25 ranked supremacy games on the official TAD patch/WoL/EP (Vanilla and TWC stats will be excluded) are needed to enter. The account used to register must be an active account (active within the past 3 months).

3.8 – If a match or series is interrupted in any unplayable way, the match will restart with all players that are still playing and that have at least 1 town center up. Depending on the circumstance, it could be considered a ‘no contest’ and will be reset on the same map with the same civilizations, a win for a team who are in position of an imminent victory, or other action will be taken if needed. If there is a player that is the cause of this interruption, they will be immediately disqualified. If a player is suspected of an unplayable interruption they may be disqualified according to the discretion of tourney admin.

3.9 – When a player disconnects from the internet BEFORE 30 seconds, the players will restart/replay the game.  When a player disconnects AFTER 30 seconds, the players can (when all teams agree) restart/replay the game. If the opposing teams do not agree to restart, the game will continue on and the disconnected player’s teammate will resign.  The team with the player who lost connection will be given a loss.